The Kirpal Sagar Academy consists of several buildings: the main wing , two side wings, the labs house and the building for the arts.

An essential part of the main wing is the auditorium, at the back of which is the schoolyard with the small stage. The main wing also houses the directorate, the computer room and the library. The two wings, each with 12 classrooms and the distance learning room, are connected to the side. Separated from this are the laboratory building for the natural sciences and the art building with outdoor stage, art and music rooms. Further classrooms are located in the college building. The buildings are from the late 1980s. In addition, there are several dormitories of the boarding school as well as the canteen.

The art wing has an integrated, roofed outdoor stage. Above it is the large lecture hall of the college. Music area with two classrooms and rehearsal rooms is located behind the stage on the ground floor. The outer wall of Kirpal Sagar forms the final wall, behind which lies the agricultural land of the neighbouring village of Daryapur. At that time only a little sand was piled up, so that the water runs together at this building. At a depth of about one metre there is a dense layer of clay which prevents the water from seeping away. Monsoon water can flow under the building, where it is sucked into the building by the brick walls. Now a musical classroom and rehearsal room is dependent on a sufficient damping of the volume. Cellulose-containing building materials are usually used for this purpose, mostly the typical egg cartons, which are, however, sensitive to moisture. In addition, insects like to use them as nesting aids and easily digestible food.

To improve acoustics, an experiment is now being carried out with waterproof panels, which are used in underground garages in Europe and are also available in the vicinity of the Academy in India. If the material proves its worth in terms of moisture resistance and insect colonisation, both rooms will be clad on walls and ceilings. The material can be sprayed with commercially available wall paint.

How Can You Help?

If you want, you can even do it by hand during assembly. Simply ask for more information using our contact form.

Financial support is also in demand. Please use our donation form or the KS-Plus account information, given in the footer-menue. Making music together brings people together without big words. 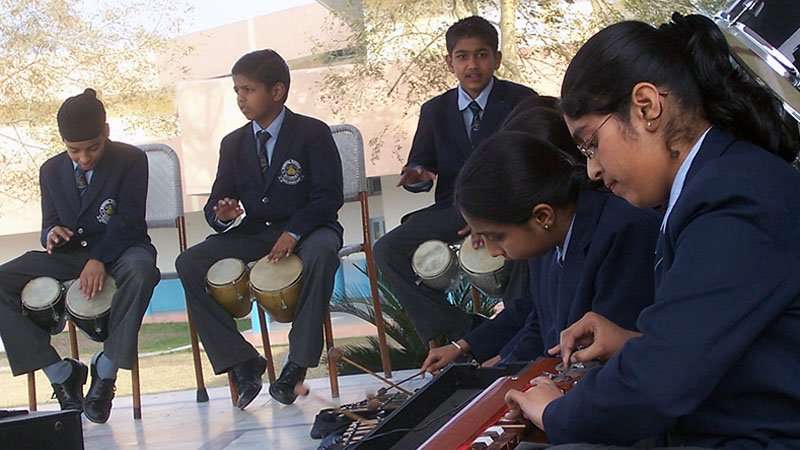